This my official midsummer celebration dish for you!

Having no garden myself, I got soooo excited when I found zucchini flowers on the market! Ever since I saw a deep fried version years ago in an Italian cookbook, I’ve dreamed about inventing a recipe myself. And now – finally – they were sitting in abundacne right in front of me. I carried them home feeling like a treasure seeker with a box of jewels. It was a surprise that I had found them, so I had to improvise and bought three more ingredients that celebrate the season like little else: cherries, peaches and green beans. 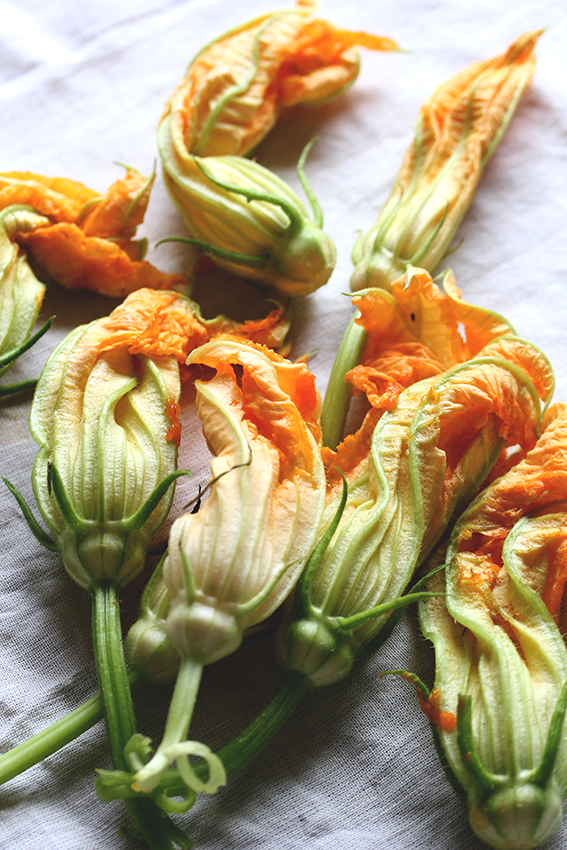 Wanting to make the most of my treasure trove, I made two different versions: for the first, I filled the flowers and baked them in the oven (this one can easily be turned in a vegan recipe), for the other, I coated the flowers in a gluten-free crust and fried them – both are absolutely delicious! Each recipe will serve for 2 persons as a light meal or for 3-4 as a starter. Of course you don’t have to make both recipes at the same time like I did – I wrote down the recipes as if they were individual ones.

80g pecorino oder parmesan (simply omit the cheese to make a vegan version or even better: substitute with nutritional yeast)

a handful of flat leaved parsley

a little lime or lemon juice

if you want the dish to be more like a salad, add arugula or sorrel

To make the filling, finely chop the herbs and mix with almond pulp, grated cheese (or nutritional yeast), sea salt, black pepper and freshly ground nutmeg. Preheat the oven to 180 °C. Carefully remove the pistils from the bottom of the flowers and fill 1 tsp of the mixture in each of the flowers. Set a little of the filling aside in order to crumble it over the dish in the end. If possible, carefully twist the tops of the flowers and line on a baking tray. Drizzle or brush with olive oil and sprinkle with a little sea salt. Bake in the oven for 10-12 minutes until they become crisp and golden.

Trimm the beans and steam or cook them until just tender, you don’t want them to become too soft. They should still have a certain crunch. Half and pit the cherries. Slice the peach and grill the slices in a griddle pan (or simple use a normal pan) with a little olive oil, a pinch of sea salt and the pink pepper. Assemble the beans with the peach slices and the salad leaves, if you are using them, top with cherries and courgette flowers, sprinkle with mint leaves and leftover filling and drizzle with a little lime juice.

a few springs of parsley & mint

a little lime or lemon juice

if you want the dish to be more like a salad, add arugula or sorrel

Carefully remove the pistil from the bottom of the zucchini flowers. Prepare three shallow dishes: the first one with the quinoa flour, the second with the scrambled egg – whisk in sea salt, black pepper and freshly grated nutmeg, and the third with the almond pulp/meal. Toss each stuffed flower first in the flour, shaking off any excess, then in the egg. Finally coat with the almond meal and set aside. Heat the coconut oil in a frying pan and carefully place the flowers in the hot oil (reduce to medium heat). They’ll take about two minutes on each side to turn golden nicely (be carful not to burn them. Remove from the pan, drain on kitchen paper and sprinkle with a little salt & pepper.

Meanwhile, trimm the beans and steam or cook them until just tender, you don’t want them to become too soft. They should still have a certain crunch. Half and pit the cherries. Slice the chili very finely. To assemble, place the zucchini flowers on the beans, cherries (and sale leaves, if you are using them) and sprinkle with the chili, shave pecorino, torn parsley & mint leaves and drizzle with a little lime juice.