I guess like most people I really love cheesecakes – I’d even go so far to say that its many versions are my favorite kind of cake. Much more than butter cream torte and spongy cakes anyway. In Germany most families have their own recipe, the main ingredient being quark. Which is great, because it is much more tangy than cream cheese or mascarpone. Sadly quite a few turn out to be too dry and sweet for my liking. The best textured cheesecake I ever had was apparently in  Ottolenghi’s Islington restaurant – the caramel macadamia cheesecake that one can also find in his cookbook. So creamy and moist…a dream of a cake. However, this one is even lighter and gorgeously tart. 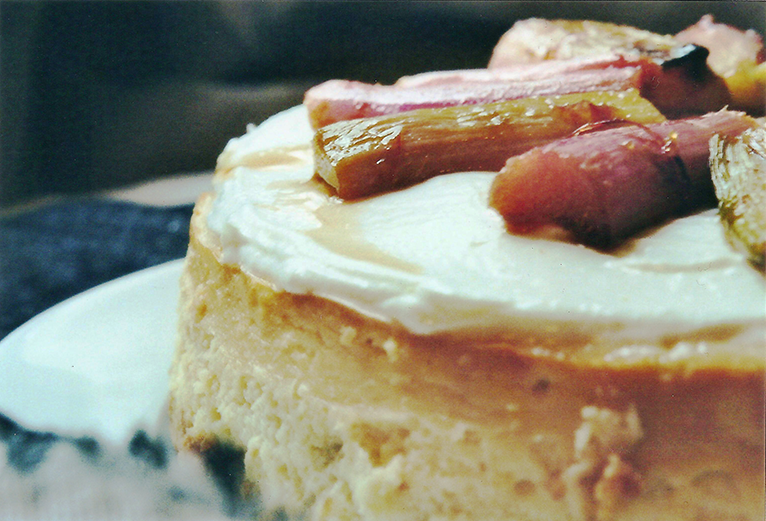 2-3 cm piece of ginger, chop finely and let soak over night in 3 tbsp of rice malt syrup to make your own ginger syrup

150g quark (in Germany this is easy to find, substitute with fromage frais or strained yoghurt)

about 3-4 rhubarb stalks, choose the pinkest ones and use the pink ends rather than the more greenish tops

Line the base and the sides of a 20cm springform tin with baking parchment. Melt the butter and stir in the nuts and oat flour. Press the mix into the base of the tin. Preheat the oven to 220°C.

For the filling, beat the soft cheese just until smooth with an electric hand mixer on low speed. Gradually add the stevia, also on a low speed, then the arrowroot powder without overbeating. Whisk in the lemon zest and juice and the ginger. Beating the eggs before adding them to the mixture is very important, it will make the cake much fluffier. After you have added the beaten eggs, finally whisk in the quark. The mixture should be smooth and quite runny.

Pour the filling over the crumb base and bake for 10 minutes on the high temperature, then lower the heat to 100°C. Bake another 25 minutes. After the 25 minutes, shake the tin a little – there should be a wobble in the centre of the filling. Turn off the oven, keep the door closed and leave the cake in for 2 hours. Open the door, loosen the top edges of the cake with a knife, then leave in the oven or on the shelf to cool gently for another couple of hours.

Meanwhile prepare the topping. Cut the rhubarb in 4or 5cm long pieces. Heat the oven to 130°C. Place the rhubarb in an ovenproof dish large enough to hold it in a single layer, drizzle with the mixture of the infused rice malt syrup and the orange juice (if you fancy it even more gingery, add a little extra grated ginger). Stir to coat. Roast for 30 minutes until tender, then drain off the juices and cool.

Mix the quark with the lemon juice and spread over the top of the completely cooled cheesecake. Decorade with the rhubarb pieces.

The sun is shining lusciously through the young leaves of the chestnut trees in front of my window – so I just had to capture this combination of light green from the leaves, the pink form the tree’s flowers and the feeling of spring!

This salad still has a faintly wintry notion with the citrus and the slight bitterness of the frisée and the radish sprouts and still is so light and fresh that it is a perfect springtime welcome greeting.

On the market nothing marks the arrival of spring clearer than the appearance of rhubarb and asparagus. Today was such a market day and since I have a craving for rhubarb the whole year round till its finally in season again, I will start sharing quite a few recipes with this pink bunch of tangy happiness

Originally – in my teenage years – it was baking much more than cooking that intrigued me to experiment with new recipes. I’ve always had a sweet tooth and after school, while working in a café in New Zealand, that was very popular and known for its cakes, even played with the idea of becoming a pastry chef. Over the years however, I was baking less and less – a birthday cake and some Christmas cookies eventually. I also have to admit that I’d always choose a humble berry crumble over a refined French macaron…

That said, I do love tarts, whether savory or sweet, and am a big fan of a little sourness here and there instead of over-sweetened icings. So I just had to make this French classic. While a tart au citron is one of THE classics of the French pâtisserie, there are many, many recipes out there. I’m not claiming that this one is more authentic than others, but I assure you that although I’m using a lot of butter here, it will taste rather light, is not too sweet and the curd will be very creamy, since its not made with starch or cream, which causes the cream to set a little to much for my taste. The recipe will make six 10cm tartlets or 1 tart.

I made a classic version with meringue and a personalized one. You can decide which one to make – or make both and tell me which one you preferred!

To prepare the dough, whisk together butter, almond meal, vanilla powder, salt and stevia until you’ve got a creamy texture. Mix the egg well into the batter. Then sift in the flour and whisk quickly, avoiding to overwork the batter. Form a ball with your hands and place in the fridge for at least 2 hours.

Preheat the oven to 180°C. Grease the tart shells. Roll out the pastry quite thinly on a lightly floured surface. Cut out circles that are bigger than the tart shells, so there is enough dough to cover the sides. Press down gently in the forms and trim off any excess pastry. Stab some holes in the bottom using a fork. Place in the oven (if you want to, you can cover the pastry with parchment paper and pour in some dry legumes, but I don’t think this is necessary) and bake for 10 minutes (if you are making the meringue version) or a few minutes more for the caramelized-lemon-version, until the pastry turns slightly golden. Remove from the oven and let cool completely.

In the meantime prepare the filling. I a heavy-bottomed saucepan whisk together zest and juice of lemon, stevia as well as the eggs. Let simmer on medium heat, stirring continuously. Be very careful not to bring the mix to boil! Otherwise the eggs will set. Keep stirring – that will take 15-20 minutes – until the mixture thinkens and is not liquid anymore. Remove from heat, add pieces of cold butter and quickly whisk under the mixture. Whisk the mixture for two minutes with a hand-held blender – that will make it light and airy. If you are making my personalized version, mix cream cheese with the sea salt and spread it on the bottom of the tartlets before you are pouring in the lemon mixture and set aside.

For the meringue version, whisk together egg whites and salt, gradually adding the rice malt syrup, until it forms stiff peaks. Preheat the oven to 150°C. Either spread on the lemon curd or decorate with a pastry tube. Place in the oven for 5-10 minutes until the meringue starts to turn golden. Let cool for 1-2 hours before serving.

For the caramelized lemon and the fried sage,  put the syrup, lemon juice and water into a heavy-bottomed pan and stir over a low heat until the syrup has dissolved. Bring to the boil and bubble hard for 10 minutes or until you have a sticky syrup when you swirl it around the pan. Now add the finely sliced lemon, without pips. Bubble for 2–3 minutes, then remove from the heat and leave to cool. Fry the sage leaves in butter until they turn crispy. Decorate the tart with one lemon slice and sage leaf each.